Q: #464. Was Jesus nailed to the cross through His hands or wrists?

A: It is really impossible to know the answer to this with certainty. The Bible does not “conclusively” give us an answer, nor do historic writings. We do know from historic writers (i.e. Josephus, Tertullian, etc…) that different forms of crucifixion were practiced. In regards to Jesus’ crucifixion, all we know for sure from the Bible is that Jesus was nailed to a cross (not a stake as some like the Jehovah Witnesses teach) through His “hands” and feet (Jn 20:25-27)(Ps 22:16)(Lk 24:39-40).

I put parenthesis around hands because there are many scholars who believe that “hands” does not necessarily mean “through His palms.” Instead, they believe that nails were were driven through His “wrists.” There is good evidence to support this theory. However, there is also evidence to support that nails were driven through His palms. Since we cannot know for sure, I will simply provide the evidence for each theory.

Support for the “wrists” theory primarily comes from 5 things.

4. We have the “Shroud of Turin,” which some believe is the actual burial cloth of Jesus (this is debatable). If this is authentic, we see clear evidence (a blood spot) that nails were driven through the wrists. (We can only see one wrist, clearly.)

5. Finally, we have Jehohanan (Yehohanan). In 1968, an ossuary (burial box) was found near Jerusalem with the name “Jehohanan the son of Hagkol” inscribed on it. Inside this box were the bones of this man (dated to around the time of Jesus). There is clear evidence that he had been crucified. Heel bones were found with a nail driven through them. (Some believe it was only one heel bone.) (Photo below) The tip of the nail was bent, and apparently could not be removed, so the man was buried with the nail left in both heels. In addition to this, arm bones were found with evidence of a crucifixion with arms spread apart, and with scratches appearing to show that nails had passed between the bones. In looking at the bones of the hand, there was no evidence that a nail had been driven through them. The bones of the legs were crushed, indicating that they must have been broken to hasten his death (see: Jn 19:31-33).

Now, to the evidence for nails being driven through the hands (or palms).

1. Of course, the clearest evidence for this would be the Bible itself, which speaks of Jesus’ wounds as in His “hands.” While as we said above, “hands” doesn’t always mean literal hands, the Greek word used for hand with Jesus (and in other places) is “cheir,” which nearly always means a literal hand.

3. There is evidence that three things might have been done which would have taken pressure off of the palms.

A: In some cases a person’s arms might have been tied to the crossbeam of the cross. If this was the case, then the arms would have taken most of the weight pressure off of the palms.

B: There are some ancient writings (i.e. Irenaeus: Against Heresies [Book II, Chapter 24]) which describe the cross as having “five” extremities rather than four. This fifth extremity is believed to have been what is called a “sedile.” This was a very small seat attached to the front of the cross in which the victim could sit somewhat uncomfortably, and thereby take some pressure off.

C: There is clearer evidence that the feet may have had a piece of wood placed under them called a “suppedaneum.” This would offer the victim some support, but also prolong the agony. Perhaps the best evidence for this is called the “Alexamenos Graffito.” This is a sketch carved into plaster that was found near the Palestine Hill in Rome. “The image shows a young man worshipping a crucified, donkey-headed figure. The Greek inscription approximately translates to “Alexamenos worships [his] God,” indicating that the graffito was apparently meant to mock a Christian named Alexamenos” (Wikipedia). Looking at this sketch, we can see that the donkey figure is standing on a piece of wood while on the cross.

Ultimately, how Jesus was crucified is not really that significant. What is important is that He gave His life for our sins on the cross. His sacrifice, and shed blood, allows all who have placed their trust in Him, and surrendered their lives to Him to have eternal life. If you have never done this, you can do so here. 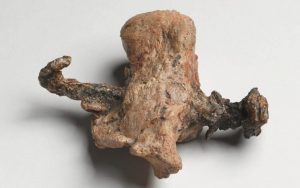 I started researching after I had a dream of the crucifixion, and whent through the experience, I noticed that the nails went through the wrist, it was a very traumatic dream and experience. Thank you for the article.