So, were there dragons in Bible times that were like what we think of as dragons today? There is some evidence this is possible from ancient writings, drawings, and artifacts from places such as China, Africa, India, England, and the Middle East which mention and depict “dragons.” But, are these based upon what was actually alive at one time, or were they just cultural legend that was being passed on? As far as I can tell, there is no way to know for sure.

From a scientific standpoint, there is little proof that there were ever actual dragons in the past. For example, I ran an online search for “fossils of dragons,” and while see you can see plenty of dragon fossils in the results, according to scholars, most (or all) are a hoax. There are a few interesting pictures that some Japanese fishermen took of a decaying corpse that they caught while fishing that looks like a dragon, but again, it is certainly not clear proof (of course, they threw it back in the sea after the pictures…). (One picture at bottom)

But, let me go in a different direction now. While there is no “clear” proof that there were actual “dragons” in the past (or that they are mentioned in the Bible), there is PLENTY of proof that there were once dinosaurs, and these are mentioned in the Bible. It is also important to understand that until 1841, what we call “dinosaurs” were called “dragons.” A man named Richard Owen came up with the term “dinosaur” in 1841. Obviously then, since the KJV Bible was written in 1611, the word “dinosaur” hadn’t yet been invented. Therefore, the Hebrew word tanniym, translated as “dragon” in the KJV, was used sometimes for what might have been dinosaurs, or dinosaur like creatures.

I firmly believe dinosaurs are mentioned in the Bible in the book of Job (Chapters 40 and 41). I explain this in another study, so I won’t go into this here. Characteristics of the animals described in these chapters clearly fit with dinosaurs. It is interesting to note a few of the characteristics of “Leviathan” in Job 41. (Job 41:14) says he has “terrible teeth,” and (Job 41:19-21) says the following: “Out of his mouth go burning lamps, and sparks of fire leap out. (20) Out of his nostrils goeth smoke, as out of a seething pot or caldron. (21) His breath kindleth coals, and a flame goeth out of his mouth.” Is this speaking about dragons? Kind of sounds like it, right?

Let’s close by looking at a few more descriptions of “dragons” in the Old Testament.

While the above descriptions don’t really give us much help as to whether or not there were actual dragons in Bible times, the descriptions in Job, as well as evidence from ancient cultures at least seem to give the “possibility” that “dragons” once existed. However, until we obtain clearer evidence, I am not convinced that what we know as dragons today ever existed.

Are dinosaurs mentioned in the Bible?

My Bible mentions unicorns. Were there unicorns at one time? 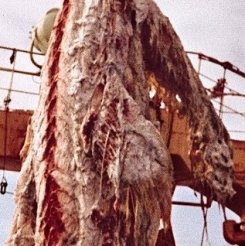